This evening will be attending the Varli Food Festival. This will be one of the final events before I start out for home. It has been a pleasant and exploratory experience for me – all these days I have been on the move and extremely motivated by the love, people have for Indian food and how intrigued they are with the recipes….my book How to Cook Indian has hit the right spot! Sending some pictures of the enjoyable evening at Indique Heights with Chef KN Vinod being the most gracious host. I had a very nice time with recipes from the book being presented by Indique Heights chefs, Abraham Varghese and Sivaraman Balamurugan. Chef Vinod made the food more delectable by passing around his inhouse specialties of Tamarind Margarita and Hot Passion. He also used this opportunity to introduce some elegant Nasik wines from India. The restaurant had a lot of enthusiastic guests who not only relished the food but also loved some photo ops with me!
Most people don’t know that Chef Vinod is not only my friend but has also been my boss some 25 years ago! I had just got out of catering school in Delhi and came to the Ashok Hotel group. We cooked for thousands of people, for weddings and conferences. He was amazing, intelligent and caring – at a time when chefs weren’t sharing information with each other, he did so. Chef Vinod introduced me to food writer and cookbook author Monica Bhide about five years ago. She was quite helpful in advising us about what would and wouldn’t work in US with regard to ingredients and all. I told her I didn’t want to tone down the Indian-ness of these recipes. The result is a book that is progressive, yet authentic. 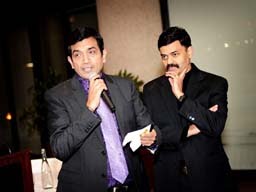 With Chef Vinod
Take for example, a recipe called Tender Coconut and Cashew Curry. This recipes calls for tender green cashews as well as tender green coconut. Now, both these are not readily available in the States. So, I made a Kolambi Cashew Curry. This particular recipe is substantially different from its original incarnation. But I couldn’t do this book and not include this dish! So, I got the suggestion that I use shrimps instead of coconut. To approximate the texture of Indian cashews that are soft and almost creamy, we used soaked raw cashews in very warm water, then drained them. I cooked this dish for Bonnie S Benwick of Washington DC in the kitchens of Indique Heights over a short Q and A session. 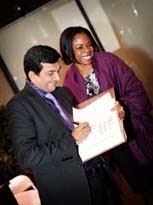 We had a press meet yesterday to announce the debut of our FoodFood channel on 24th January. FoodFood is the most gastronomically loaded lifestyle and entertainment concept available across TV, mobile, web etc– a 360 degree brand on the world of food, in collaboration with Mr. Raghavendra Madhav of Astro All Asia Networks. Malaysian company Astro is an integrated cross media group, with presence in Malaysia, India, Middle East, Australia and international markets, primarily engaged in the provision of direct-to-home subscription television services, radio services, film library licensing, multi-media interactive services, and television content creation, aggregation and distribution. In India, Astro has a stake in Sun Direct and South Asia FM. The company has also recently bought 49% stake in India’s premier lifestyle channel, NDTV Good Times.

We also have Ms Madhuri Dixit Nene as the Lifestyle Ambassador of FoodFood. She not only epitomizes Indian womanhood, but being a foodie herself, she brings to the brand a lifestyle perspective. She said on the occasion that she is extremely excited with the concept and thought behind FoodFood and that she looks forward to contributing as its Lifestyle Ambassador.
Through FoodFood, we hope to create a medium that will celebrate food in all its splendor across multi platforms. This TV channel is just one among many platforms to follow. With the concept of Cooking+ Food +Food-lifestyle, the TV channel aims to be all things food. Not only does it have it’s very own “Food Editor” – renowned chef, Rakesh Sethi ( with over 28 yrs experience across Taj SATS, Oberoi and Intercontinental hotels), it has also roped in several Indian celebrity chefs ( Nitin Tandon, Shantanu Gupte, Anurag Bali etc) to add spice to it’s programming content.
FoodFood COO Mr Karthik Lakshminarayan was also present on the occasion. He emphasized that our chefs not only understand food and cuisine, they are also in tune with the audiences’ lifestyle preferences. He stressed that we will produce and package content for our shows that are relevant to the Indian audiences. FoodFood is not just about stand-and-stir kind of shows, it will feature programming that is compellingly interactive with the audiences.
Targeting the middle class Indian in urban towns and cities as its core audience, FoodFood will produce and package all its content in India. The entire content and programming is in Hindi and is created by Indians, for Indians. In order to connect to our audiences across the country, we will feature shows about food and food lifestyle like ‘Firangi Tadka’, ‘Sirf 30 Minute’, ‘Sanjeev Kapoor’s Kitchen’, Chef ka Muquabla and Ready-Steady-Cook, to name a few.
FoodFood will redefine food in our lives. Food is all set to become the new entertainment. FoodFood is not just a food channel, we are here to provide our viewers their very own Khushi ki Recipe. The channel will be available in both analog and digital formats pan India.
January 18, 2011November 16, 201170 Comments

Press meet to be followed by lunch.

From My Kitchen
Blog at WordPress.com.