The first step to accomplishing a task, is to believe that you can do it. This was the sentiment that me and the entire team followed, when we decided to take over this mammoth feat – of creating a Guinness World Record for the largest quantity of khichdi ever made and we did achieve it, that too with a huge margin!

World Food India – the country’s first ever and biggest global food event, a gateway to the Indian food economy and an opportunity to showcase, connect and collaborate with international businesses and investors – served as a fitting platform for an event of this magnitude. While the actual cooking of the khichdi started at the crack of dawn on 4th November 2017, the process and deliberation culminated in this mega event had been on for months! Several protocols, hygiene and safety standards and quality control measures and technological barriers have to be taken into consideration to accomplish this gigantic task. There was no flame involved and the entire cooking was done through steam generated by a 150 meter long pipeline, a good distance away from the podium. Hundreds of kilograms of high quality locally produced rice, dals, bajra, ragi, amaranth, fresh vegetables and pure desi ghee have gone into a 1000 litre capacity, 7 foot diameter kadhai to create 918 kgs of nourishing khichdi and a brand new Guinness World Record. 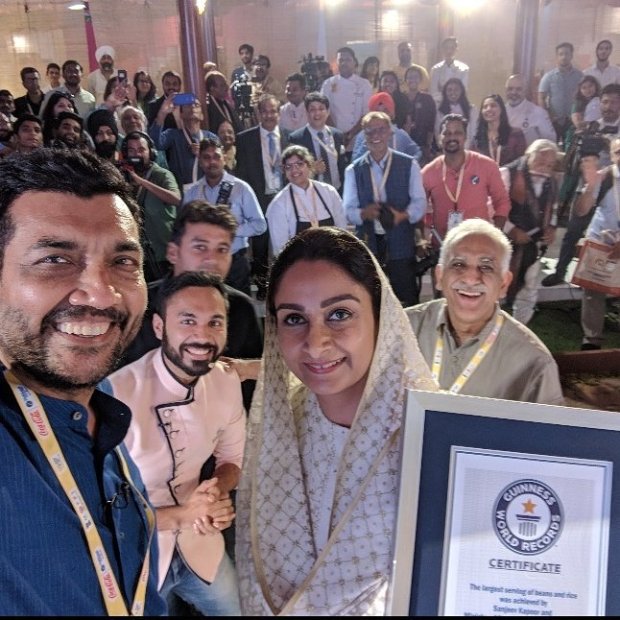 The fact that Guru Purabwas on the same day, was a very happy coincidence too. A large part of the khichdi was distributed by The Akshaya Patra Foundation to deserving children in Delhi and the rest to Gurudwara langars across the city. It is events like this that make me believe – the joy of giving is more than the joy of receiving!

The grand success of this event was only possible with the effort and cooperation of several individuals and teams – The Government of India, Honorable Minister for Food Processing Industries in India, Ms Harsimrat Kaur Badal, The Akshaya Patra Foundation, the dedicated team at World Food India,my super talented team of chefs, led by Chef Akshay Nayyar and last but not the least – the team from Guinness World Record who have been cooperative and helpful in every way!

Other than the charity and world record, there has been plenty ofbuzz about ‘why khichdi?’ My reply is – why not? It is nutritious, healthy, tasty and is eaten pan India, albeit in different avatars! Moreover, we need to understand that the motto of making this khichdi was not just to create a world record, but also to create a buzz and demand for fabulous Indian ingredients in the International market. With all the statistics coming in post the event, I would like to believe we are on the right track. It makes me feel closer to achieving my dream of putting Indian food on the number one spot on the world map.

A dream which I can turn into a reality only and only with the continued love and support of friends, family, fans and my fellow countrymen!