Why does brown rice get such a rap? Ever thought about it? Most people share a common myth that brown rice is insipid and takes a very long time to cook. The vagaries of the mind and associated myths that I must clear as a chef are never ending, this being one of the most common. So what is brown rice? – A question that pervades many young adult minds. 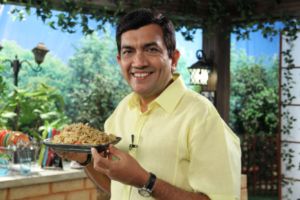 Brown rice is one of the best and healthiest things to partake.  In addition, to being healthy rich in fiber, cholesterol-lowering fats and nutritious minerals and antioxidants – brown rice has a deep, nutty flavor and texture that’s tasty and definitely not boring. In fact, it is loaded with nutrients as well as taste.

After the husk or the outermost protective, but non-nutritive layer is removed from a grain of rice you get brown rice. Brown rice retains the nutrient rich bran layer that gives you a higher nutritive value in terms of protein, iron, vitamins and essential minerals. It is this fibrous bran coating that gives brown rice its light tan color, nutlike flavor and chewy texture.

Brown rice isn’t a recent health fad; it has been on the Indian plate ever since we discovered rice! What’s more it comes in both short and long grain varieties. With time, more and more people are picking brown rice over white rice, especially in urban India, due to easy availability and the growing understanding that white rice is stripped off the nutritious bran layer which is present in brown rice. In fact let me tell you my secret; I introduced Brown rice to my family by introducing it during dinner amongst friends. The benefits and different taste got such rave reviews that we switched to using Brown rice regularly without batting an eye.

I have also found a friend in Daawat quick cooking brown rice because unlike other kinds of Brown rice it cooks in just 15 minutes. Daawat brown rice is available in the longer, fluffier more fragrant Basmati variety in most stores. Buy these in 1 kg or 5 kg packets, depending on your usage and consume within 6 months of purchase, like you should do with any kind of rice.

Actually, if the basmati is brown, then it’s a case of sone pe suhaga, as the phrase in Hindi goes.

Here’s a list my seven reasons why I advocate Brown rice and particularly Daawat Basmati Rice to enjoy meal times with family:

With so many fabulous benefits, there is no reason for you to not switch to brown rice today!

Disclaimer – The generic benefits explained here are sourced from multiple references. The company or the client does not claim all the benefits except those pertaining to the technology

This isn’t my first trip to the African continent but, it sure is one of the most memorable. We were there to attend the Good Food and Wine Show 2014, in Durban, South Africa. My colleague Chef Anupa Das and I headed straight from the airport to the beautiful Hotel Elangeni which by the way in Swahili and Zulu languages means ‘where the sun shines through’ and what better place could actually do justice to the word. 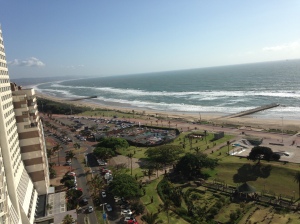 The hotel is located at perhaps the most beautiful spots in Durban, where your room faces the beach, and the beautiful promenade at the beach beckoned me to walk! Also, it was extremely windy all the time and later we got to know from the locals that we were quite lucky to get such a pleasant weather in Durban, otherwise it’s quite hot this time of the year! Fortunate enough is all I can say!
I started off saying this trip to Durban was one of my most favourite, the reason being Diwali. I definitely missed home, but the people and the celebrations in Durban during Diwali made sure I wasn’t very home sick. While we were at an interactive and fun conference cum cocktail party, we 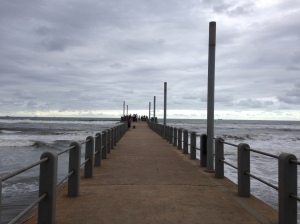 got invited to celebrate Diwali with this warm and welcoming Indian family.
They showed us the true essence of Diwali in Durban. This family has lived there for generations, their ancestors moved to South Africa decades ago, so the culture and traditions of the Indian community in Durban is a beautiful mix of Indian and South African culture. Spectacular lighting and pretty fireworks were on display. There was almost actually a pool table full of fireworks which went on through the entire course of the evening. Dinner was a very typical Durban style biryani made with the much used ‘sugar bean’ served with dal, unlike an accompaniment that would be served with a biryani in India. Strange combination, but an absolute palate tickling preparation!

The next two days were all about the main event at the Good Food & Wine Show where I had some food demonstrations to be done. 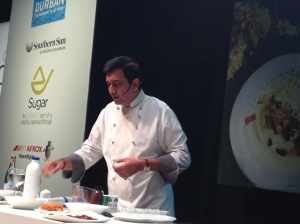 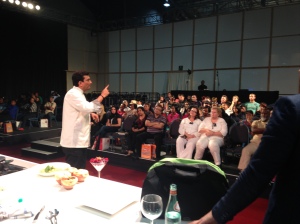 It’s always exciting to see how people from different strata and regions of the world come on the same page when it comes to good food! 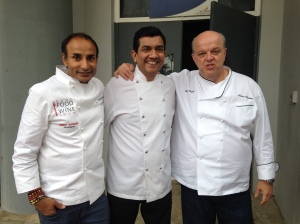 The green room was actually a lot of fun with Chef Maura Castano of Cake boss fame and Chef Reza Mahammad chatting up about food, fun and philosophy. Did also, managed to squeeze in a couple of media interactions, like an interview with the channel SABC3. All this was followed by a grand Indian dinner at The Oyster Box.

During the 3 days I did my best, hopping to places to try the local food and to shop. Quite interestingly, the local food has much of an Indian influence with curries being a popular item. 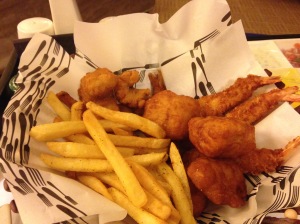 Even vegetarianism is widely followed here. Whether it’s the Mauritian dishes like Octopus Curry, Mauritian Prawn Curry and the likes at Restaurant Ile Maurice digging into the Banichka (a Durban curry served with bread) and Seafood Platters at the cafes on the beach promenade– the food in Durban is quite fascinating and are reason enough to keep visiting Durban. 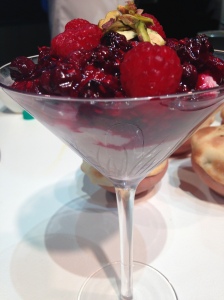 We visited this little shack called the appy chappy, which is very popular with the locals and in their accent sounds really different– hence it took us a while finding the place. The Mutton bunny chow and the chicken curry and roti we ate here were completely worth the search, probably more! 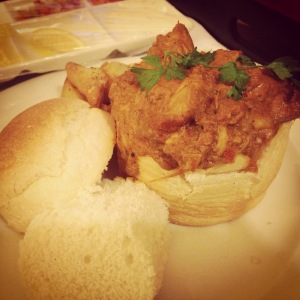 The soul of Durban not just lies in its picturesque land, but the people and food as well! From kids to oldies, what is common is the fabulous spirit of the people!
All in all, I would end by saying that it was one amazing trip! South Africa is very welcoming and I definitely look forward to visit another parts of this beautiful land in times to come. Maybe I should start planning my next restaurant venture there or… you never know! Keep guessing!