If there is a searing summer, then a torrential monsoon will follow. The taste buds crave for hot, crisp savoury foods and it is not unusual to come across deep-fried foods in many homes across the country. It takes a few drops of rain for us to rush to roadside vada pav stalls in Mumbai and gorge on these hot spicy potato bites of heaven often served with fried green chillies and a spicy garlic chutney. Perfect with a cup of hot Masala Chai! Something like chole tikki back in Delhi is a filling snack on a rainy day. Growing up in Delhi, I do remember sitting cozily inside the house with a plate of mirchi bhajiya while the Earth got washed by the seasonal rains but this time lets go down south and see what our beautiful southern states have to offer during the monsoon months!

Go Goa
Close to Mumbai is Goa – a tourist’s paradise which becomes more verdant in the rainy season. When it rains in Goa, the rivers become bubblier than before, the leaves on the trees are sparkling clean and the wind chimes through them musically. To a new visitor,   monsoon in Goa is full of surprises – it can mean sudden bursts of torrential downpours that usually last for a short time, although there are occasional periods when it rains for hours on end. These sudden bursts are always succeeded by bright sunshine that lights up the countryside in brilliant colours.

Being close to Arabian Sea, Goa boasts of excellent seafood. The fresh supply of seafood and coconuts dominate delicacies of Goa. During the monsoon, from mid June till end September, fresh fish is scarce and people have to be satisfied with fish caught in the rivers and creeks. During this season, it is salted shrimps and mackerels (prepared in numerous mouth watering ways) that find their way to the family table. Its ‘no-fishing’ time during the months of rain and the fish loving locals are well prepared. They dry, salt and store seafood to use when there is no fresh catch of the day. The requisites for authentic Goan cooking are certain ingredients peculiar to it like triphala and kokum. Hardly any Goan dish is complete without coconut as one of its main flavouring agents. Fresh coconut, in one form or other is added. It could be grated, ground fine into a paste or in form of milk extracted from the flesh of fresh coconut. Fish Ambotik served with rice is one of my favourite combinations.

Land of Murukkus
Let’s travel a little further south to Karnataka famous for the murukkus and Mysore Paak. This state is perhaps as green as it could be! There are craggy precipices; huge stones precariously balanced one on top of other, curvaceous rivers and beaches bleached to a silver. It has dense forests, the Nilgiri Hills, temples and archeological relics, which if they could narrate would tell stories of thousand years back in history! For foodies, Karnataka offers a fantastic vegetarian cuisine with rice, sambhars, rasams, dosas and bondas sprinkled with fragrant ghee. When the wet months come, so does the fear of malaria. There are certain traditions that are followed in Dakshin Kannada in the wet months. A bitter decoction of maddale is made in most homes as a preventive measure to malarial fever during the monsoon. A sweet dish is prepared out of madhtoppu herb, which is found growing luxuriantly in Coorg. This herb is believed to have eighteen medicinal properties and is harvested on the eighteenth day of Karkatamasa (July 15 to August 15). This day is also the day Coorgis prepare kozhi (chicken). Say they, during the monsoon the chicken accumulates excessive fat content to fight the cold weather and if eaten will add to the body fat. One of my favourite cold remedy also happens to be my favourite food – Tomato Rasam – sip on a bowlful of this piping hot soup topped with coarsely crushed black pepper and say goodbye to colds!

God’s own country
Being a small coastal state, Kerala is known for its lush greenery and palm lined backwaters and rich dance form Kathakali! It enjoys a very good monsoon from June to November making it one of the pleasanter states to visit any time of the year. And when it rains here, it is as if cans of green-coloured paint have been emptied onto the landscape. When there is torrential rain, the usual fishing activity comes to a standstill.  But Keralites savour non vegetarian food, so mutton dishes are also quite popular. As the coastline is dotted with plantations of coconut palms, coconut finds its way into almost every preparation. Overall, food in Kerala is non-greasy, delectable and comforting. Crisp banana wafers and jackfruit chips fried in fresh coconut oil are a speciality of the land. Crisp pancakes and steamed rice-coconut cakes or puttu made from pounded rice along with spicy chickpea curry make up breakfast in many homes on a rainy morning.

Keralites love seafood but fishing is not greatly encouraged during the monsoon season which is the main fish breeding season so as to preserve the wealth of the sea. The locals believe that the monsoon season (karkkidaga) slows down digestion and appetite and hence, tackle it in many different ways. Inchikkari, made of ginger and other spices, acts as an appetizer besides aiding digestion. Since rheumatic disorders seem to increase when it rains, porridge made of navadhanyas (nine pulses and cereals) called karkkadakka kanji is served to old people. Any visitor to a home in Kerala during the rainy season is sure to be treated with Chukkuvellam which is a medicated drink made using chukku or dried ginger and other spices. Besides being a welcome drink, it aids to dispel cough and cold generally seen with a change in weather.

A taste of Chettinaad cuisine
One place I travel to often is Chennai, the capital on Tamil Nadu. I always enjoy the steaming hot Kanchipuram idlis and aromatic filter coffee! You would be surprised to know that rainy season in Tamil Nadu is between October and December when the northeast monsoon brings rains in spurts. November is a good month to experience cool clime but come armed with raincoats. Tamil Nadu, whatever the season, is known for its idli, dosa, vada, appam and kadubu. Many of us would also equate Tamil Nadu with its spicy hot Chettinaad cuisine. It is one of the spiciest, oiliest and most aromatic in India. Most dishes have generous amounts of peppercorn, cinnamon, bay leaves, cardamom, nutmeg, green and red chillies. It is enjoyable to have food that tastes like this and enlivens the taste buds when the rains make the day dreary. Chettinaad fried chicken is simply perfect!

But when it rains what every local person would like to enjoy with filter coffee would be crisp vadas. It could be medu vada made of (urad dal) or it could be ambada (chana dal)  and sometimes vadas made of masoor dal or tuvar dal or even mixed dals. Or it could be a kozhikara vadai.

Where heat reigns
This trip ends at Andhra Pradesh which is so hot in summer that the skin sizzles, the hair frizzle and the roads seem to be covered with a layer of steam as if the tar is melting. It cools down a bit from July to October as monsoon sets in. When the rains are lashing down, what is needed is something to satiate the hunger pangs and fight the heat! Cooling foods such as raw tamarind chutney or a yogurt and onion relish offsets the heat of the day and the hot chilli content of a typical Andhra meal. Andhra is well known for its Guntur red chillies. One would notice that the number of vegetarian dishes is more in Andhra Pradesh than non vegetarian stuff. Tamarind rice dish called pulihara is a favourite and is usually served with spicy sambar. Also worth talking about is the Nizami food that makes Hyderabad so famous. Some specialties are Haleem – paste of wheat and meat spiced delicately, mirchi ka salan and bhagare baingan. All these foods are filling and nutritious and perfect during the rainy season.

So tell me about your monsoon food quests till I write again sharing some more of mine. Till then get drenched in the rain and the awesome world of monsoon foods! 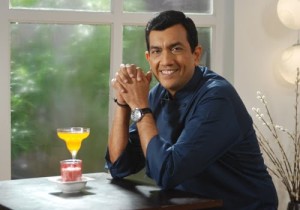 January saw the launch of FoodFood TV channel and the last few months seem to have passed by in the blink of the eye! They say time flies, and I would say, so true! We are about to wrap up the eleventh month of 2011 and this year has been a year of tremendous learning. I would say, any step you take, toward achieving something new, it bound to give you some learning. I am now in the middle of another schedule of shoots for my show on FoodFood and with each schedule the ideas seem to flow easier, the management seems to be easier plus we are extra careful not to repeat all the mistakes that wasted any resources in the previous shoot schedule. My focus, and soon you shall see, is on vegetables and how they are wonderful main courses in Indian cuisine. You are going to be totally floored by what the humble vegetables can play up to on your table.
Interestingly, vegetables are often recommended in abundance in reducing diets because of their very small energy contribution and their large amount of water. In fact, green beans, cabbage etc have more that 90% water. Vegetables are important in meals to provide not only an array of minerals and vitamins, but also colour, flavour and textural contrasts. More elaboration as the shows are telecast spread out over the coming months.
Spent the weekend in Goa attending an important Marriage. Though it was a hectic and short trip, it is always nice to go there and enjoy some Xacuti, clean breeze and lush greenery.
As I said, my focus in on vegetables, so why not start cooking them right away!
Bharli Mirchi
Capsicum Kayras
Drumstick Curry 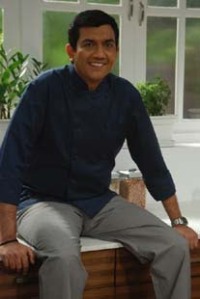 Kick off time for the Foodfood Maha Challenge in Chandigarh!
April 20 is a big day for all food lovers in Chandigarh. FUN REPUBLIC will be a feisty venue for the roadshow! Registrations for the challenge and live food demos begin at 12 noon and are likely to go on till 3 pm. To avoid disappointment be there early!
lots of help coming from my team The Yellow Chilli restaurant in Panchcula; Romil and Neha Mahajan have always been around and stood by me whenever needed.
Chef Saurabh Saxena of my team stationed in delhi, will also be travelling to Chandigarh to assist me and the event.
I will be demonstrating some exciting recipes and as soon as I pen off from here I will put on my thinking cap and finalise the list.
Holidaying in Goa and loving every minute with the kids and family. Some lovely Goan food that we are enjoying….
Chicken Xacuti
Prawn Balchao
Goan Chilli Pickle.

Till I write again.
Sanjeev Kapoor.